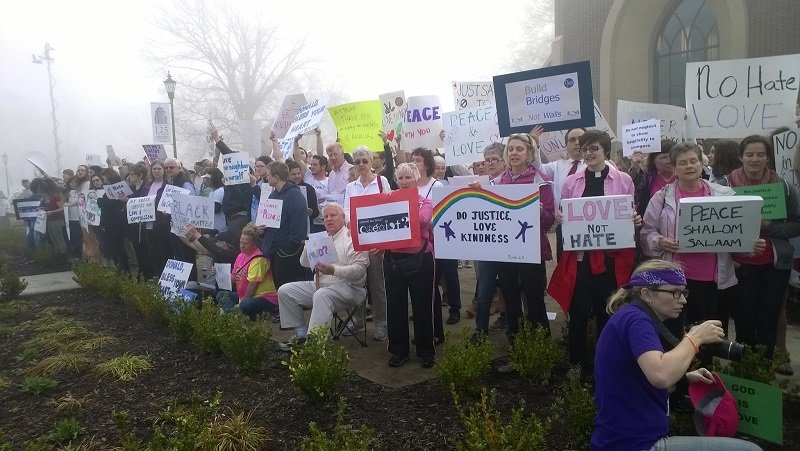 Last Friday, when I heard that Donald Trump would be speaking at Lenoir-Rhyne University, which is an institution of the Evangelical Lutheran Church in America, I was livid. Then I learned how institutions of higher learning make themselves available to all political candidates in the interest of a free exchange of ideas. So, Mr. Trump decided to speak at L-R. Okay. Well, it was not okay, really. But I understood why L-R allowed it to happen.

As it turned out, as enraged as many of us were, it gave us Lutherans an opportunity to bear witness to Jesus, so I’m glad it happened. After a bit of Facebook messaging with our NC bishop, Tim Smith, plans were underway for a peaceful demonstration at the event. I was going to be away for the weekend. The last thing I did before walking out the door was post a FB event and get the invitations going. The first thing I did when I returned home, before I unpacked my bags, was print off 35 signs to take to the rally on Monday.

They were simple signs. None of them bashed Donald Trump. That wasn’t our intent. We were gathering on Monday morning to lift up the teachings of Christ, which happen to be antithetical to the teachings of Donald Trump. Most of the signs were Bible verses: “God is Love”, “Do justice – Love kindness – Walk humbly with God”, “Do not neglect to show kindness to strangers”, “As you did if for the least of these…”

I didn’t know what to expect as I traveled through the dense fog to Hickory early Monday with my friends Dick and Cherie. Would many be there to stand with us and our bishop? Would we succeed in bringing a peaceful presence to the gathering? Would anyone even notice we us?

The auditorium where Trump spoke seats about 1,400 people. They gave out over 4,000 free tickets. When we arrived, people were standing in a line that snaked all through the campus. Pockets of protesters were scattered here and there. Pastors in collars were starting arrive. I quickly distributed all the signs I brought and saved one for myself that said: “BRIDGES NOT WALLS.”

In the end, approximately 300 Lutherans gathered that day to show those who had come to the Trump rally what it means to follow Jesus. Some came from as far away as Nashville and Atlanta. A group of students and professors from our seminary in Columbia joined us. About 100 of us were wearing clergy collars. We sang hymns about love, grace, and justice, over and over, until we were just about hoarse.

Because of the fog, Trump was two hours late in arriving. When folks standing in line were finally told they weren’t going to get in, things got tense. The grassy area that had separated protesters from supporters slowly melted away and angry people on both sides were standing face to face, shouting obscenities, ready to exchange blows. Those of us wearing collars were called upon to hold the line. We linked arms and did just that, standing between anger and anger. One of us started singing “Jesus Loves YOU” and we all joined in.

I read a Facebook post from someone who was there. The person wrote:
“…out of nowhere, a red-haired redneck started screaming at the Latinos. They were nice back, but a black group then jumped in to their defense and it got ugly, with a lot of profanity. I was in the middle of this and then a bit of shoving started. Before I knew it, about a dozen pastors jumped in and formed a line between the factions, locking arms and singing hymns. How I got in that line I don’t know, but it was surreal, really a religious experience. These days, I am not really pro-organized religion, but I was daggum proud of them today- they really were the peacemakers…”

I know you didn’t see any of this on the news. But I’m telling you it happened.

I also spent some of my time mingling in the crowd. I talked to a group of young African American men who told me how they had tickets to go inside the event and they were turned away at the door. They were wearing nice clothes. They were respectful. And they knew there was only one reason why they were turned away. I don’t know for sure if any people of color were admitted to the rally, but according this this group of youth, none were.

As I passed by a group of African American young women, they were all laughing, so I had to ask them what was so funny. “Look at that!” they said. I looked up and saw a sign that said, “Free Gucci.” Huh? “What’s that about?” I asked. “Isn’t Gucci a purse?” They just about fell on the ground laughing. “Gucci is a rapper,” one explained. “And he’s in jail?” Yes, he’s in jail. “Well, I learned something new today,” I told them.

After the rally ended I spoke to some of the people who had heard Trump speak, including an older white couple. The man was an Air Force veteran. “How was the speech?” I asked them. “Oh, he was so wonderful. I’m so glad we came!” “He didn’t talk very long, did he?” I asked. “No, but he has to get to Florida. They need to hear what he has to say down there.” I held up my BRIDGES NOT WALLS sign and said, “Well, I’m on the other side, but I’m glad you got to hear him.” They smiled.

I have no doubt that many of the 4,000+ who came to see Trump in Hickory self-identify as Christian. I wonder what they thought when they heard us singing traditional Christian hymns, when they saw us lifting up the Scriptures in our signs? Could they hear and see Jesus? Could they recognize the dissonance between the message of Jesus and the message of the one they came to hear speak that day?

We ELCA Lutherans are often hard on ourselves because, although our first name is Evangelical, we don’t feel like we’re very good at living up to that name. I think a big part of that is because we think that evangelism means walking up to strangers and convincing them to accept Jesus as their personal Savior lest they die today and end up in hell. We’ve allowed a certain flavor of Christianity to define what it means to be evangelical for us. Actually, evangelism is sharing the good news about Jesus. And, I don’t see a whole lot of good news in the scaring-the-hell-out-of-people approach. The actions of the Lutherans gathered at Lenoir Rhyne on Monday were about as evangelical as you can get. We were there to show people another Jesus than the one they may have seen from those who use the name of Christ to invoke fear, hatred and judgment.