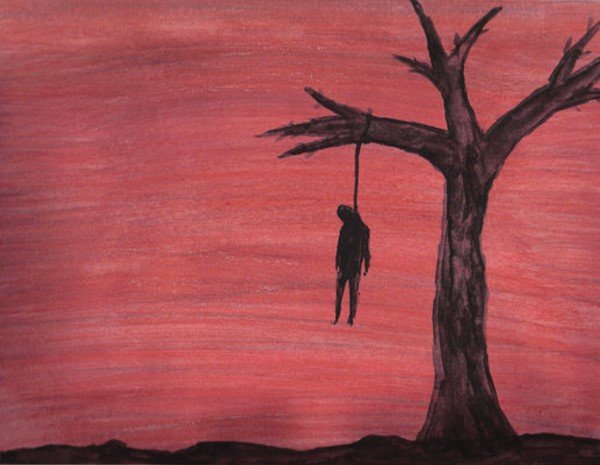 At Holy Trinity we gathered outside the building for the Blessing of Palms and then processed into the nave singing a raucous two-part song that filled the space with electricity. It was noisy, much like I imagine the streets of Jerusalem were as Jesus made his grand entrance with crowds cheering and branches waving. But just as the tone of Jesus’ final week quickly shifted, so did the tone of our worship on Sunday.

On Passion Sunday, we have developed the practice of listening to the entire passion narrative presented as a readers’ theater at the very end of worship. Then we have a brief confession and depart in silence. It’s always powerful when an entire congregation, including restless kids, walks out of the building in complete silence.

This year, between the reading of Luke’s Passion and the confession of our own complicity in the crucifixion of Jesus, Lonnie was with us to sing, “Were you there when they crucified my Lord…” Lonnie has a powerful voice that you have to hear to believe. He is a well-known expert in African American spirituals and sings from the heart, like someone who truly believes every word coming from his mouth. His rendering of “Were You There” brought chills to my spine and tears to my eyes.

What many people at Holy Trinity don’t realize is that when Lonnie was a small child in Louisiana, he was forced to witness the death of a man hung from a tree at the hands of a lynch mob. That man was his father.

Just let that sink in for a while.

We understand that we didn’t have to actually be present to be complicit in the crucifixion of Jesus. We can identify with the guilt of humanity. Some people call this the doctrine of Original Sin. To me it means that sin is a part of what it means to be human, it’s inescapable, and we have to face that hard truth about ourselves.

But I wonder if the majority of Americans, who happen to consider themselves white, can comprehend our complicity in the Original Sin of our nation, the sin of slavery? Can we begin to confess the way we have systematically tortured and killed those who were stolen from their homes and brought to this country as a commodity to be traded and sold like investments on Wall Street? Can we recognize how the American Dream that we hold dear excludes so many of those who have fought for and built our nation at the cost of their own bodies? Can we admit our own moments of judging the actions of others based on the prejudices we carry about their race? Can we acknowledge the racism that has become so much a part of who we are that it has become invisible to us?

I was having lunch with a group of friends and one of them remarked about how tired she is of hearing about racism. Now that the “Black Lives Matter” movement had made its point, it’s time for us all to move on. (Did I mention that this friend is white?) She’s a good person who often advocates for the poor and the marginalized, so I was surprised to hear her say this. And yet, I know many other white people who consider themselves above racism share her feelings. All this talk of racism is making them weary.

What a luxury it is for us to decide when racism is a topic that has become old for us and we’re ready to move on. The mother who worries every time her young black son leaves the house that he might be shot has no such luxury. The black children who drive by gated, affluent suburbs filled with McMansions and well-manicured lawns and then return home to neighborhoods riddled by crumbling buildings and drug deals happening on every street corner have no such luxury. The young man who has been incarcerated for the same crime that can be dismissed easily for a person with the right color skin has no such luxury.

Where You There. I will never hear that song again without thinking about Lonnie’s father and the countless people in our country who have been lynched at the hands of a hate filled crowd. Like Jesus, they have been victims of a system that seems to only find security by identifying “the other” to hate, fear and destroy.

Were you there, sisters and brothers of mine who self-identify as white? We hear the words to the song with some understanding that, yes, we were there when Jesus was crucified, and we beat our breasts in contrition. I wonder how we can be so moved by the cross and yet so indifferent to Michael Brown, Eric Garner, Trayvon Martin and those who are crucified in our midst?