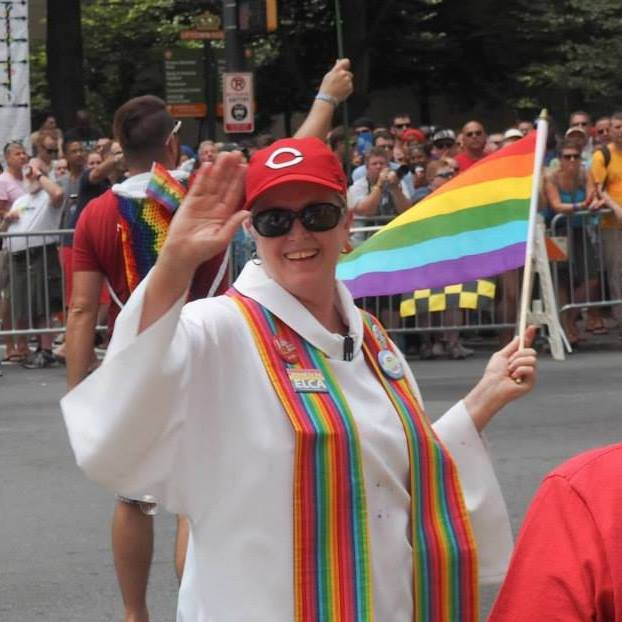 Monday night I had dinner with two close friends who have been through some amazingly glorious times with me at Holy Trinity as well as gut-wrenching challenges that seemed insurmountable. One of them observed that I have become an icon in Charlotte, and I’ll be moving to a place where no one knows me and I’m just another pastor. I’ve been thinking about that a lot since she said it.

Am I an icon? Yikes! It’s an overstatement, for sure, but that’s the way she perceives me and I know she’s not alone. Please understand that I’m not suffering from a grandiose complex. I realize that most of the people in Charlotte don’t know who the hell I am. But there are also many for whom I am something of a pseudo-celebrity—the LGBTQ community, progressive people of faith, ELCA Lutherans. Some of that notoriety comes with longevity; I’ve been here a long time. But it’s more than a matter of racking up years. God planted me in just the right place during a historically significant time.

You may have heard the story of how I informed the call committee at Holy Trinity that I would not be a spokesperson for LGBT equality as their pastor. I would love them, I would be their pastor, and I would help them become a vibrant congregation again, but I would not be putting myself out there as a champion for the LGBT community.

Ha! In no time at all, I learned that by loving them and serving as their pastor, I simply had to stand up for them. I couldn’t keep silent when the people I loved were being treated as less than fully human by my denomination and by the world around us. So I began to speak up. At first with trembling voice and racing heart, and then in time, with passion and a fire in my belly. It wasn’t that I was particularly brave. It was that love won out.

Before my Holy Trinity days, I was never the kind of person who enjoyed putting myself out there for people to take pot-shots at me. At times I might have been bold in the pulpit, where I was protected from opposition, but I seldom strayed from that comfort zone. I was an inactive activist, at best. I had a lot to say about justice, but never really did a lick about it.

This extraordinary congregation on The Plaza has changed me. All the stuff I always said about following Jesus became real to me in a way I’d never experienced it before. Then opportunities to do more than just talk the talk, but walk the walk, presented themselves to me. And I couldn’t refuse. Not if I wanted to look at myself in the mirror again. I knew that if I was going to talk about following Jesus, I actually had to follow Jesus. That’s what I’ve tried to do. I’ve stumbled and made some wrong turns from time to time along the way, but I’m confident about the way–the Way of Jesus.

I haven’t been alone. Most of the time I’ve just jumped on board the train as it was pulling out of the station. The support of organizations like Reconciling Works (Lutherans Concerned) and North Carolina’s Moral Monday movement, as well as the courageous compassion of Charlotte’s progressive faith community, have pulled me along the way. I’ve been particularly blessed to serve in Charlotte alongside colleagues like Robin Tanner, Nancy Allison and Judy Schindler. If I have done some good for the community while I’ve been here, it’s because others have opened doors for me and I’ve simply walked through them.

So, all the kind accolades coming my way these days make me a bit uncomfortable. I don’t know who I will become in my new call. God seems to recreate me in every congregation I serve. It’s true that, in this environment. the conditions were just right for me to grow a pair. But in my new environment it’s possible they may return to their prior state of dormancy.

It unnerves me a bit to think about plopping myself down in Towson, Maryland, a place I know nothing about. In a different place, in a different time, I have no idea what to expect or who I will become. It seems that people who know me are expecting me to be the same person I’ve been in Charlotte, and I don’t know that I will be. Time will tell.

No doubt, I’ll do what I’ve always done. I’ll be watching for doors to open before me, and when they do, I’ll walk through them. But God only knows what those doors will be and where they will lead. I trust that they will move me forward on this journey I’m on, doing the best I can to walk the Jesus Way in the world.

May God guide me along the way, catch me when I fall, and give me all the faith I need to trust that God’s grace is sufficient.